Decade of the kidney™ - answer the call! 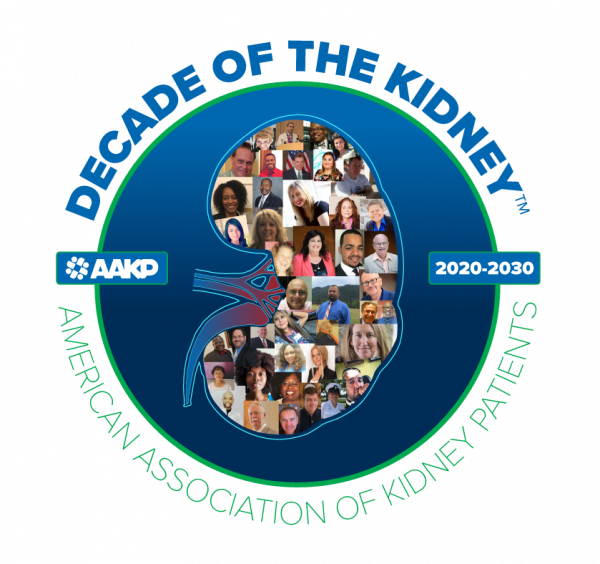 WELCOME TO THE DECADE OF THE KIDNEY™!

AAKP and our allies know the next ten years will see optimistic and sweeping changes in kidney disease understanding, research and treatments. Patients and patient insights are and will remain central to these changes – and greater patient engagement will determine the speed and access to new innovations.

Between 2020 and 2030, kidney patients will witness the accelerating evolution away from the tired status quo of bricks and mortar dialysis as we know it and toward a future defined by patient choice; targeted therapies that inhibit kidney disease and prevent kidney failure; greater access to donated organs and new devices - including artificial wearable and implantable kidneys.

And, patients will see their voice and their experiences have a far greater impact on an innovated environment, dominated by patient needs – not the narrowly defined needs of status quo special interests that are all too often at direct odds with the principle of patient care choice.

AS A COMMUNITY OF STAKEHOLDERS HOW WILL WE ACCOMPLISH THIS?

The answer rests in The Decade of the Kidney ™ - a transformative announcement AAKP made in June of 2019 at our 2nd Annual National Policy Summit in Washington, D.C. - designed to unite the community around a central thought – or a “big idea.”

For the future, in The Decade of the Kidney™, we will see even greater contributions from every sector of our society and every discipline. These include medicine, science, academia, elected officials, industry, media, entertainment, government and of course, the military and insights from our veteran populations.

These sweeping changes will not be limited to our shores as Americans – they will incorporate the vibrant contributions of scientists, researchers and clinicians around the world whose achievements are moving us closer to addressing the toughest kidney diseases. As patients we know that kidney disease affects people everywhere – it does not discriminate, it knows no political affiliation and it recognizes no border.

To accelerate change, AAKP believes that a far larger strategic context and message is needed to unite a broader base of Americans and far more communities behind ongoing efforts to fight kidney disease and give hope to the 40 million Americans who suffer from kidney disease.  We believe that The Decade of the Kidney ™ does precisely that – it helps explain to the general public and national policy leaders that each of our singular efforts and innovations underway in kidney disease are in fact part of a far larger national effort to save and improve lives for those who suffer from kidney disease – and those yet to be diagnosed.

AAKP recommitted itself to this original formula and strategy to gain new national relevance; exponentially greater engagement and growth among kidney patients and their families; and far greater influence to push for greater patient choice and more innovative care options for patients. Working together, AAKP and its members and allies have achieved profound impacts in the past several years – including legislation that allows HIV to HIV organ transplants, lower prescription drug costs and, most recently, AAKP contributed to the White House Executive Order on Advancing American Kidney Health and the Department of Health and Human Services (HHS) initiatives to fight kidney disease.

AAKP also believes that by uniting all sectors of the kidney community under one strategic theme – it will be far easier to secure additional media and grassroots support, national research funding and public understanding for kidney disease.

So what is your role in this effort?

What is your role in this effort?  That is fairly simple:

Stay engaged with AAKP as a member – follow us on social media, engage with us in our webinars and attend our events online and in-person as you are able to. For 2020 our major events include, the 2nd Annual Global Summit, 3rd Annual Policy Summit and 45th Annual National Patient Meeting, and we will be letting you know of the many opportunities to be engaged with our valuable allies across the kidney community.

Get more active as an advocate, 1.)   contact your Congressional officials and tell them your support for greater care choice and more innovative care options that allow you the freedom to pursue your aspirations – including to work, own a home and to have a family. Learn more at the AAKP Action Center.

Stay tuned – AAKP will be providing you with resources including graphics and social media links that will help you become an even more effective participant and enthusiastic spokesperson for the The Decade of the Kidney ™.

We look forward to channeling your energy and enthusiasm in The Decade of the Kidney™ -
after all, the best way to ensure victory in the larger battle against kidney disease is to always think:  “If not us, who? If not now, when?”

Center for Engagement and Advocacy