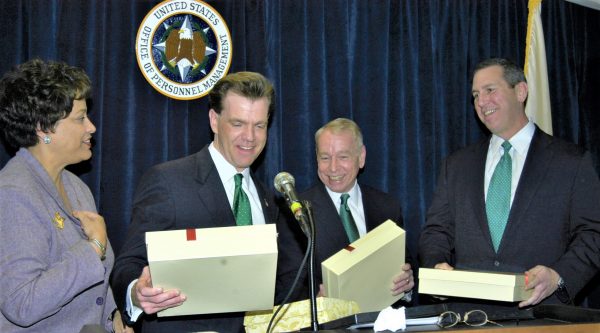 As two kidney patients who have lived at the intersection of politics, policy, and presidents throughout our personal and professional lives, we are occasionally asked about our experiences and knowledge of the Executive Branch and White House operations. As the one year anniversary of the bipartisan and groundbreaking July 10, 2019, Executive Order (EO) on Advancing American Kidney Health approaches, we have been asked several very directquestions, including: what is it like to serve in a presidential administration, what steps are involved before presidential action is taken on a historically significant policy EO, and what is supposed to happen after a president signs an EO? Working for the president of the United States, the most powerful person in the world, and within a presidential administration, is a rare privilege. Across our wide network of friends and colleagues who have served presidents of both parties, this is a universally held and deeply personal feeling. It is an honor to serve your nation and the public at a moment in history, to serve the highest elected official in our great democracy, and to be surrounded by rich American history, especially the White House. For us, the privilege to serve our fellow citizens and to aid efforts to advance both economic opportunity and national security has provided a sense of fulfillment that remains undiminished by partisan distractions.

During the course of our careers, we have been involved in the development of multiple bipartisan EOs and legislative initiatives developed in close coordination with stakeholders, the U.S. Congress, and White House teammates. From our perspective, the thought and energy invested in the EO Advancing American Kidney was quite sophisticated. The steps involved in preparing this document–with massive implications for patients, the healthcare industry, and the American taxpayer (who currently pay the largest share of the $100 billion a year cost of kidney disease)–are indicative of the level of political capital that was invested on behalf of kidney patients and the kidney community.

The EO language is not at all random–it was carefully considered. The administration actively sought out patient insights through both formal and informal processes, including those offered by AAKP as the largest fully independent kidney patient organization in America. Thus, it is no accident the EO closely mirrors the strategic, non-partisan principles and patient consumer rights for which AAKP has advocated throughout our 50-year history as well as those shared by our national allies. The patient and kidney community demands earlier upstream disease prevention and intervention, greater patient consumer care choice, more access to transplantation and greater availability of critically needed organs, and greater use of home care options. These were each included in the EO. The language also acknowledges the inevitable march of American ingenuity by anticipating disruptive advances in research, personalized and precision medicine, artificial wearable dialysis devices, and artificial implantable organs.

Before the president signed the EO, hundreds of appointed and career professionals and stakeholders were involved in creating that moment. The process in this case involved more than a year of time as specific and ancillary policies were envisioned, vetted across the Executive Branch by multiple Federal Cabinet agencies and subcomponent agencies, and then road tested with a wide array of kidney stakeholders and seasoned experts outside the kidney community. Within the White House, in close coordination with Secretary of Health and Human Services Alex Azar and his HHS team, the proposed EO principles and policies would have met eyes within the Office of Management and Budget, White House Domestic Policy Council, Office of General Counsel, Office of American Innovation, Office of the Chief of Staff, and various other White House offices, including Legislative Affairs, Intergovernmental Affairs, Public Liaison, Communications, Speech Writing, Science and Technology Policy, and more. Since the EO involved a signing event outside the White House complex, an additional spectrum of experts were engaged through the U.S. Department of Homeland Security, U.S. Secret Service, and additional White House offices, including the Office of Presidential Advance, all to make certain the president and his guests would enjoy secure moment in kidney policy history. Presidential time and the time of administration officials is the highest valued asset and rarest commodity in any administration. Knowing the process involved, one can better appreciate the unique policy victory that was handed to the kidney community in 2019.

On that day, President Donald Trump appeared at the signing ceremony in the Ronald Reagan Building and International Trade Center in Washington, D.C., flanked by kidney patients, Secretary Azar, and other HHS officials. In the audience were patient advocacy leaders, elected officials, government executives, investors, researchers, and the courageous entrepreneurs behind the next generation of medical innovation. AAKP President Richard Knight, Vice President Dan Abel, Secretary Edward V. Hickey III, and Board Members Brian Hess and Kent Bressler were also present. Lobbyists for the status quo dialysis industry were there as well, perhaps to virtue signal support for patient-centric policies or gain political intelligence on how reforms might threaten the multi-billion dollar interests they are paid to represent. Unlike many events in the nation’s capital, this event was defined by substance. The EO and ceremony sent a clear message that the lives of kidney patients, the disparate outcomes and high mortality rates they suffer, and outdated treatments they have endured were about to change for the better.

After an event of this magnitude, what should happen after the president of the United States has signed the EO and left the building? The answer is simple. Once the ink was dry, the onus for timely and long-term implementation shifted to the kidney community. The fulfillment of a policy EO is never the sole responsibility of the federal government, nor should it be. Over the past year, the Federal government has played its part by standing up and delivering on their responsibilities through new policies to accelerate patient care choice and better treatments. Even in the midst of the COVID-19 crisis, the principles of the EO have been present in federal announcements related to telemedicine, organ procurement policy transparency, new CMS payment models, and actions to support greater kidney patient and minority inclusion in streamlined clinical trials for drugs, diagnostics, and devices.

Based on our experiences expediting White House initiatives, the ultimate success of the EO will be determined by consistent supportive actions undertaken outside the federal government. In particular, the kidney organizations at the table while the EO was developed and later pictured onstage with the president of the United States should be judged for their effectiveness. In July of 2019, AAKP operationalized the EO as an important first step in what we have publicly announced as The Decade of the Kidney™, an era that will be marked by many more policy achievements in the fight against kidney diseases. We have dedicated substantial resources and a highly aggressive patient education and growth strategy to support this endeavor. Over the course of the past year, we have continued to advance the EO principles and policies in close coordination with like-minded allied organizations as well as transformation catalysts, including the Kidney Precision Medicine Project, the Kidney Health Initiative, KidneyX, the Clinical Trials Transformation Initiative, and the Center for Dialysis Innovation.

But in politics and public policy, there are no permanent victories–only permanent battles.

Already, some of the organizations in attendance last year have wavered in their outward support for the EO. Others, like big corporate kidney care, have sought to wall off innovation and competition through the anti-patient choice BETTER Kidney Care Act, and, in an unsurprising move, one kidney organization (an adjunct of big corporate dialysis interests) photographed on stage with President Trump last year filed suit in June of this year against Secretary Azar and CMS Commissioner Seema Verma seeking to thwart their efforts to make new home dialysis and telemedicine technologies more accessible under new Medicare rules. This anti-competitive and protectionist lawsuit was justified under the disingenuous guise of protecting patient care quality, as defined by the status quo dialysis industry.

AAKP will continue our nonpartisan support for true patient care choice, greater medical innovation, and better kidney patient outcomes long past November 2020, regardless of the election outcome. However, if those principles are ever threatened in the federal arena or by special interests seeking to diminish the independent voice of kidney patient consumers, you can count on AAKP to use all capacities necessary to speak truth to power. The EO outlined a positive path forward for the entire kidney community, especially for patients and their right to choose the best treatments to support their aspirations. Please join us as and our strategic allies as we build on the 2019 policy victory, write the future, and sweep status quo kidney care onto the ash heap of medical history.

Mr. Paul T. Conway, AAKP Chair of Policy and Global Affairs and immediate past president, has served three U.S. presidents and in support of five presidential transitions. He served President Reagan at the U.S. Department of Education, President George H.W. Bush as a Special Assistant at The White House Office of National Drug Control Policy, and President George W. Bush as Chief of Staff for both the U.S. Department of Labor and the Office of Personnel Management and as an agency Chief of Staff at the U.S Department of Homeland Security. His father served on the Pentagon staff under multiple Chiefs of Naval Operations.

Mr. Edward V. Hickey III, U.S.M.C., AAKP Board Secretary, is a former senior Congressional staffer who served in the George H.W. Bush administration at the U.S. Department of Commerce and under President George W. Bush as the as the Senior Advisor for Homeland Security for the Director of the U.S. Office of Personnel Management. His family was personal friends of California Governor Ronald Reagan and Mrs. Nancy Reagan and his father served as Governor Reagan’s Executive Director of the California State Police and later as President Reagan’s first Director of the White House Military Office.